The keyboard accessory for this year’s Samsung tablet has been designed from the ground up to address the criticism such keyboards have been receiving. To start with, the official keyboard cover, called the BookCover Keyboard, for the Galaxy Tab S6 now comes in two parts—one that sticks to the tablet’s back and the other one is the keyboard deck itself. This implementation not only leaves some extra space in the keyboard area but also allows for a more ergonomic kickstand.

Usually, such keyboard cases, like the ones for Apple’s iPad lineup, offer just one, or at most two angles at which the tablet can be positioned. Samsung has gone for something like the Surface Pro with the back cover now flipping out to form a rigid kickstand. Like the Surface tablets, this stand can be positioned in any angle of your choice and it can even open all the way back for a near-flat position. 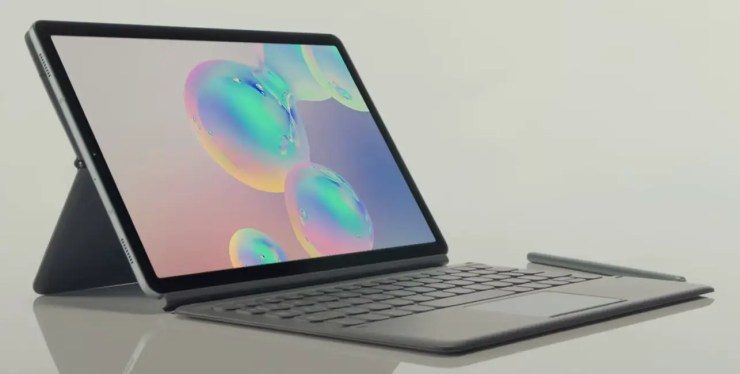 Coming to the keyboard itself, the keyboard layout benefits from the wide display aspect ratio to accommodate a full-sized keyboard with spacious key placements. Previous iterations of the cover lost a major portion forming the stand, but the kickstand used here has helped save that space for a trackpad.

TAB HERE TO GET IT NOW https://krizstore.com/product/original-samsung-galaxy-tab-s6-keyboard-book-cover-gray-ef-dt860ujeguj/

From a productivity standpoint, the trackpad will prove to be a boon for people using their Galaxy Tab S6 for working on the go as a separate mouse wouldn’t be an absolute requirement anymore. Samsung has even introduced a keyboard shortcut to quickly jump between DeX and normal mode.

Though, the BookCover Keyboard brings the flexibility of attaching a keyboard as and when needed, it does have its own shortcomings. For one, it is compatible with only the Galaxy Tab S6. Plus, if you plan on using multiple devices on your desk, then you will need at least two keyboards and switch between them to get things done on each of your devices.

You have a couple of options to pick from and we are recommending two of our favorite lightweight keyboards that will go well with the Tab S6.

View all posts by Admin Steven →